In 2015 the Coastal Partners, on behalf of Fareham Borough Council and Portsmouth City Council, secured funding to undertake a Flood and Coastal Erosion Risk Management (FCERM) options appraisal study to develop outline designs for the Portchester to Paulsgrove coastline.

There are currently 361 residential and 108 commercial properties at risk from coastal flooding in Portchester and Paulsgrove. This is expected to increase with the effects of climate change to 662 residential and 141 commercial properties at risk by the year 2115. The extent of the works for the Portchester to Paulsgrove frontage can be seen below. 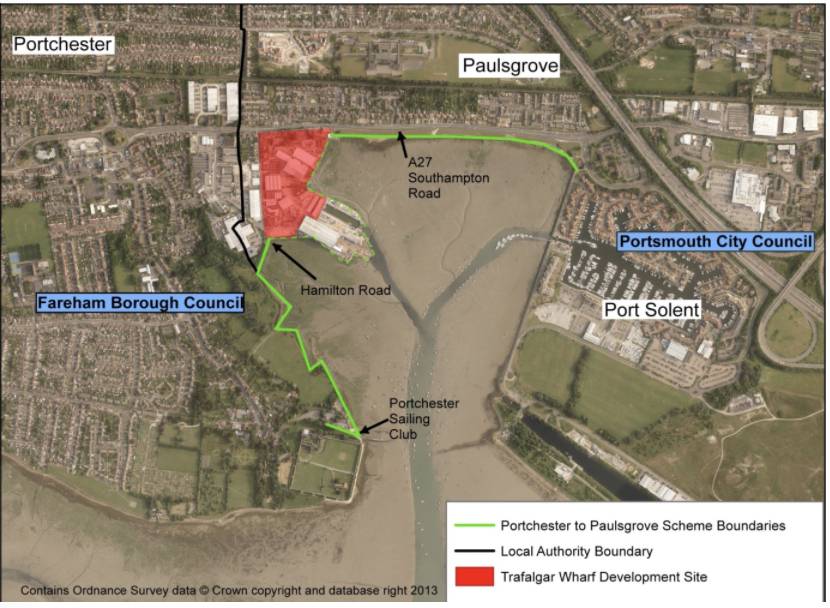 From 2015-2018 the Coastal Partners undertook the study, in partnership with Portsmouth City Council, Fareham Brough Council, The Environment Agency and Quadrant Estates to determine the best possible way of reducing the risk of flooding to the area at risk. Throughout this process there was significant engagement with the public, key stakeholders and land owners.

The aim of the partnership project was to develop options which not only to reduce the risk of flooding to the area, but which would also facilitate much more holistic outcomes such as urban and economic regeneration, housing, improved coastal access, environmental improvements, public realm improvement and the protection of heritage assets.

In the centre of the frontage lay a private development opportunity on the Trafalgar Wharf site which was looking to, as part of the wider scheme, provide its own on-site flood defences. The intention was to develop the area to provide much needed growth, housing and regeneration to an old working quayside and industrial area.

The delivery of the future scheme relied heavily on the prospect that significant contributions to the detailed design and construction of the planned scheme would be provided by the private developer at Trafalgar Wharf. Not only for their own on-site defences, but also financial contributions towards the wider scheme to protect existing residents.

In February 2018 the Coastal Partners secured technical and financial approval from the Environment Agency for the next stages of the project which proposed a £10.7 million scheme to deliver a 1 in 200 year standard of protection for the next 15 years. Future phases of the scheme were also identified as necessary, to replace other sections of defences along the frontage as they reach the end of their useful life.

The outline design options for the first phase of works, which were due to be further developed during the detailed design stage, are shown below. 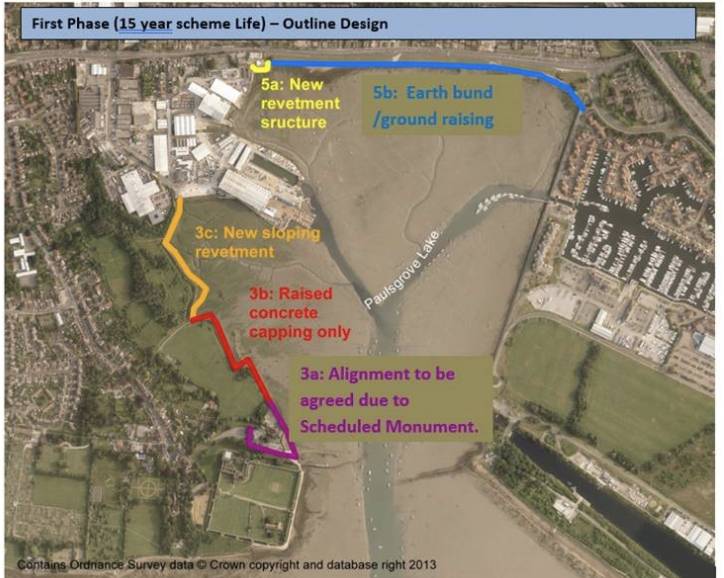 However, releasing the £5.1million of government grant approved by the Environment Agency relied upon the private developer contributing £3.075 million towards the wider defence scheme and £2.3million towards defences on the Trafalgar Wharf site. The project team had also secured a £400,000 contribution from Southern Water towards the project.

Unfortunately, at present, despite intensive negotiations between Portsmouth City Council and the private developer, a mutually agreeable method for securing the contribution has not been identified. Without 3rd party contributions the planned scheme will not go ahead in its current form.

Both Fareham Borough Council and Portsmouth City Council remain committed to trying to reduce flood and coastal erosion to the existing communities and will investigate alternative delivery models for the future. However, at this time, any future scheme is wholly reliant on government grant and 3rd party contributions.

View all news for this Project