In 2015 the River Hamble to Portchester Strategy identified that low lying properties in Alverstoke were vulnerable and at significant risk to tidal flooding.

Alongside Gosport Borough Council and the local community, we have been working to ensure new defences are built to protect the area from flooding.

There is a priority need to improve the existing defences at Alverstoke as they currently only provide a 1 in 20 year standard of flood protection. This is not high enough to meet sea level rise predictions. This scale (the Annual Exceedance Probability or AEP) is related to the scale of the flooding and the chance that it might happen. A 1 in 20 year flood event has more chance of happening than a 1 in 100 year event.

The new defences are designed to protect against a 1 in 100 year until 2060. Whilst the probability of flooding may seem quite low in any one year, the effects have been devastating in the past where the required level of flood protection has not been in place.

Properties and assets at risk:

What are the new defences?

They will consist of a reinforced wall positioned on top of the existing sea defences. The wall will run the length of the existing wall and a floodgate will be deployed across Little Anglesey road to make a continuous flood barrier. The defence upgrades will be levelled into the ground at either end of the new defences. 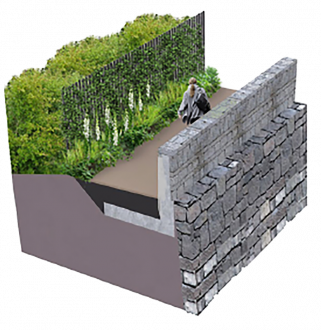 A new reinforced concrete wall will run the length of the existing defences at the western end of Stoke Lake. It will be approximately one metre high, with the side facing the lake matching the appearance of the existing wall. This will be created by pouring concrete into a special mould called an ‘ecoformliner’. The match is an important aspect both supported by the community and as a conservation planning requirement.

The wall will extend to the edge of Little Anglesey Road where a flood gate of the same height will be mounted. The flood gate will be open at all times, except during potential flood events. On the far side of the road, there will be continuation of the wall until it is levelled into the higher ground.

The wall alignment runs very close to the existing trees on Stokesmead. Every effort will be made to work around any roots, so that the trees can be retained where possible. An arboriculturist will advise on any impacts and decisions concerning the trees.

Where will the new defences be located?

The new defences will be located at the western end of Stoke Lake, between Little Anglesey Road and Clayhall Road.

They will cover approximately 100m of coastal frontage and protect against the current flood route.

The wall alignment will run parallel with the front face of the existing wall. This will reduce the impact on tree roots and buried utilities running along the existing path. The new wall will also ensure that the footpath is always accessible, even in times of flood.

What can be expected when the defences are being built?

Throughout the duration of the scheme, it is expected that a site office and area for material and machinery will be set-up in the Pebble Beach car park alongside the north west corner of Stoke Lake. This will reduce the amount of parking for a limited period, but Little Anglesey Road will remain open for vehicles and pedestrians whilst the work is ongoing.

The footpath at the western end of the lake between Clayhall Road and Little Anglesey Road will be closed to allow work to be undertaken in a safe manner. A pedestrian diversion route will be in place via Jackie Spencer Bridge. There will also be a fenced off area set-up at the end of the footpath for storage and welfare facilities for the duration of the work.

When the floodgate is installed across Little Anglesey Road, the road will be shut for a limited period. There will be advanced warning of road closures and diversions will be put in place.

View all news for this Project